Didier Burkhalter and the 5 Criteria for Positive Discipline 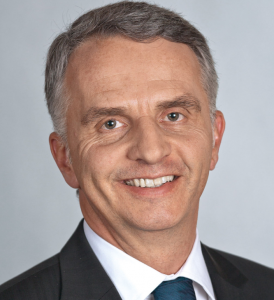 One morning, I woke up listening to Mr Didier Burkhalter’s farewell speech before the election of his replacement. Mr Burkhalter was the Swiss Federal Councillor and announced his resignation this summer to the surprise of many. One of seven in Switzerland’s executive, he became known around the world, during his stint as the nation’s president, when a photo of him standing alone on a public train platform waiting for his train.

He resigned for personal and family reasons. Mr Burkhalter is highly appreciated and was one of the ‘visible’ Swiss politicians abroad. To me, he is the Roger Federer of Swiss politics: humble, respectful, talented and down to earth. He resigned when we see many politicians trying to stay as long as possible in this status of ‘power’… what courage!

His speech very much inspired me with a strong message towards the Swiss population for keeping the spirit of mutual respect, democracy, diversity, peace in the world, protection of the environment and love of the family. The word he relentlessly repeated was ‘respect’.

– Mutual Respect (Kind and firm at the same time), respecting yourself and the others. He resigned as he has respect for his own needs as much as for his family.

– Does it help (the Swiss population) to feel belonging and significance?  Switzerland is a multilingual country with each ‘canton’ or region having their own laws.  The population is free to vote for whatever subjects they wish to bring change (should they have the required number of signatures). Topics vary from education, health, transport, insurance, reproduction, you name it.  Despite these differences, the Swiss from each canton, have a strong sense of belonging to Switzerland whilst remaining loyal to the specifics of the canton.  It is a democratic country where everyone has the right to vote and encouraged to have a part in the future of their region and nation – despite their differences.

– Is it effective long-term. And not just think about short-term economic gains.

–  Having valuable social skills. He mentioned the Swiss model of democracy where citizens are encouraged to be responsible, engaged and have a sense of community.

– Invitation to (the Swiss) to discover how capable they are and to use their power constructively.  Switzerland has a role for the negotiation of peace, and for hosting various international organizations.

I enjoyed waking up listening to this wonderful person sharing his most inner thoughts about himself, about his work as a politician, about being ‘Swiss’ and proud of mentioning his mistakes as well as his key achievements.

I wish him and his family well and thank you, Mr Burkhalter, for all your hard work and passion shared one morning. It has made my day and has given me courage as well.
__________________

Thank you for visiting and reading. I hope I have inspired you to give me a call to try on a Positive Discipline sample session if this is new to you!